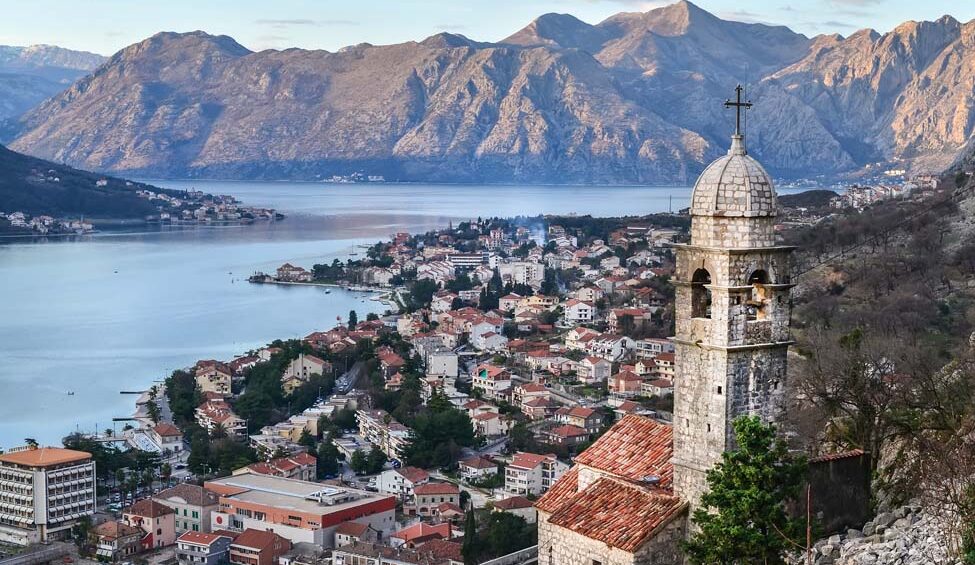 Kotor, a medieval walled city on the coast of the Adriatic Sea, offers everything Dubrovnik does, but without the crowds. Kotor’s history is just as rich as its more famous counterpart’s, and it boasts even more impressive architecture.

Kotor is a charming old town that brings you back to the time of the Venetian Republic. The old architecture and the well-preserved walls create a feeling of being in a castle, but it is actually very welcoming and friendly to the tourists. In fact, Kotor has been named as one of the top ten most beautiful ports all over the world. From the early 1550s, Sea Gate has been one of the main entrances to the city. If you make your way clockwise around the city, you will see most of its main sights. If you turn left, you will end up where you started.

The city is crisscrossed with narrow streets and squares. Each street has charming restaurants and cafes that serve savory dishes, as well as artisan shops that carry handmade clothing and accessories. The city hosts a variety of events throughout the year, including carnivals and festivals. These special events are a reminder of the city’s long history. One of the oldest buildings in Perast is the 11th-century Church of Saint Luke. It still stands today and is used for religious services. The historic Prince’s Palace dates from the 17th century, and Napoleon Theatre was built in the 19th century.

The bay has been inhabited for centuries, and the shoreline is dotted with medieval towns, mountain pathways, hidden inlets, and remote beaches. It has been a World Heritage Site since 1979. Activities include swimming, sailing, snorkeling, and scuba diving.

Kotor has a long history of naval activity. It is home to the Bokeljska Mornarica, which has been active for more than twelve centuries and still uses its traditional clothing, dance, and ceremonies.

3. Kotor is town of cats

If you love cats, Kotor is the place to go on vacation. Cat-themed souvenirs and knick-knacks can be found all over the old town, and cats wander through Stari Grad like they own the place. Even a cat museum is one of the most popular attractions in the city.

There is no definite answer to why there are so many cats in Kotor, but the most popular theory is that they were left behind by fishermen who stopped in Kotor centuries ago. These cats had plenty of time to breed with other cat breeds and create a very multicultural gene pool.

4. Our Lady of the Rocks & old town of Perast

Half an hour north of Kotor, just off the picturesque town of Perast, lie two islets. Sveti Đorđe (Isle of St George) is only open to the clergy. Gospa od Škrpjela (Our Lady of the Rocks) can be visited by anyone and is reached by boat from Perast old town.

Our Lady of the Rocks is a unique place. It is the only man-made island in the Adriatic Sea and was created over 500 years ago. In 1452, two fishermen found a picture of the Virgin Mary on a small spit of land here. To honor the discovery, they started piling up stones from shipwrecks and natural rocks around the area.

The Church of St. Mary boasts 68 paintings by Baroque artist Tripo Kokolja, as well as a small shop and a navigation light.

The islets are best viewed from one of the seaside restaurants in Perast’s old town, with a plate of freshly grilled seafood and a glass of chilled wine.

The Ladder of Kotor is an incredible hiking trail that runs along the historic route between Kotor and Cetinje. For centuries, this was the only path connecting these two cities, offering incredible views across the old town, the Bay of Kotor, and beyond.

The trail begins at the back of the old town of Kotor, zig-zagging up the mountain to follow the old city walls. It passes by the Chapel of St. Ivan and Castle of San Giovanni, both visible from below. Here you’ll find Ladder of Kotor itself, an extraordinary 72 switchbacks.

There are many reasons to visit Kotor, Montenegro, and we’ve listed five of our favorites here. If you’re looking for a place to explore that provides all the thrills and excitement of major cities like Paris and Rome but with an intimate and authentic feel, then this destination should be at the top of your list.